We said goodbye to the NICU on Friday, December 12th at around 7 PM. As we headed home, I sat next to Nicholas and watched him sleeping in his car seat. Making the transition from hospital crib to car seat just a few moments earlier had apparently been a less than positive experience for Nicholas that he shared with us very vocally. But, once he was in the car and daddy was driving he settled right in and slept for the whole 45 minute drive to Pine Island. During that ride I watched him sleep. Well, actually I watched him breathe. Very carefully. I watched each and every single breath. The whole ride home. I think (or, I like to tell myself) that all moms do this with their babies on the ride home from the hospital. As I sat in the back, Andy drove carefully home. Much more carefully than his usual “I like to drive race cars for fun so the speed limit isn’t a rule – its more of a suggestion and I think you’re going too slow so get out of my way before I yell obscenities at you, and aggressively pass you.” way of driving. (He later told me he felt like he was driving with a live bomb on that ride home and that one wrong move would cause us all to go up in flames. I guess that was his way of saying “I couldn’t watch him breathe like you could so I drove like an old man the whole way home because its all I could do.”).

Once we arrived at the house my mom was waiting there for us (Dad was picking my brother, Parker, up from the airport – more on that in a bit). My mom hadn’t held Nicholas at all during his hospital stay. Not once. She wouldn’t hold during the day when I would sit and hold him and she had my dad help me at nighttime (when Andy was out of town) with our bedtime routines. At one point during our stay in the NICU, I asked her why. Her response shook me to my core – she quietly said “Because I am afraid I couldn’t put him down. Once he’s in my hands, I don’t think anyone could pry him away from me.” I suddenly knew exactly how she felt – and what a deep love she had for him. As soon as we came into the house and started to settle in, Nicholas got hungry (he, like all babies I’m sure, gets hungry at some of the most harried times!). My mom offered to feed him, and that night for the 1st time, held Nicholas. I don’t know who was happier to be in who’s arms that night – Mom or Nicholas.

My mom, who is currently being called “Gigi” (standing for glamorous grandmother, of course) holding Nicholas.

Parker had already made plans to visit us in Florida before we knew Nicholas would be discharged. I was excited to have my brother here when Nicholas came home – he hadn’t seen Nicholas since he was just 2 days old and I was thrilled he wouldn’t have to see him again in the confines of the NICU. He and my dad came home shortly after we arrived and we popped some champagne to celebrate Nicholas’ homecoming (I find most events in my life go well with champagne) and we all sat down together for a late dinner of BBQ from Saltwater Smokehouse (side note: if you’re ever in the Fort Myers area, drive to Pine Island and eat there – it is hands down some of the best BBQ and smoked meats I’ve ever experienced – and I am from the South where we pride ourselves on our BBQ –  so that says a lot).

After dinner we were all (including Nicholas) getting settled from the days travels when we had our 1st interaction with the apnea monitor. The doctors in the NICU sent Nicholas home on an at home apnea monitor which would monitor his heart and breathing rates while we rode home to NC. Since Nicholas would be in a car seat for so long (and most newborn babies, let alone preemie babies, don’t sit in a car seat for 14 hours) they wanted us to wear this monitor full time until we got home. We had waited 4 days in the NICU for this monitor – I’ll be extremely candid here: we were placed on a waiting list for the monitor because, as I later found out, we had private insurance and machines go to babies on government funded insurance first. (Thanks again, Obamacare – you continue to punish those of us who pay our own way.) Once the machine arrived it looked simple, and quite frankly, harmless. It was a small gray box with a simple system of flashing lights on the front & 2 leds that attached to Nicholas under his arm pits. We could attach the leds via stickers which were identical to the ones he had in the hospital or put a foam belt around his chest that held the leds. We opted for the stickers as they were less bulky and Nicholas had worn them his entire life so he would be used to the feeling. They told us it would alarm when his stopped breathing for more than 20 seconds or when his heart rate dropped below 80 BPM. They warned us the alarm would be loud. They were wrong.

The alarm was not loud. It was “The world is ending, say your goodbyes to your loved ones and run. Run as fast and as far away as you can. Quickly. Get away from this sound. Before your eardrums burst” loud. There should be a new word for loud when it comes to the apnea monitor. At about 10:30 the alarm sounded for no reason – Andy was holding Nicholas who was awake and looking around. All of us froze for a second at the sound. We hadn’t heard it before and it was so frightening it caused us all to stop breathing and our heart rates to drop. Andy had his hands full so I rushed to the machine to try and make it stop making its ungodly noise. I silented the alarm only for it to go off again in 30 seconds. This continued for 10 minutes or so. Andy placed Nicholas down and came to help (and by help I mean he said words no baby should hear and tried to cover the speaker on the alarm to mute the noise so we could all think). Turns out all of the comotion was not because Nicholas stopped breathing or that his heart rate dropped. Nope, it was just that one of his leds had started to peel away. When we realized this I was thankful & (pardon me for this) pissed off. I was a whole new level of pissed off. This machine should not send out the “world is ending” alarm for a loose led. Give me a break – with all of the technology there is in the world they should make these machines with 2 noises: an “excuse me, I think we might have a technical issue” noise and a “there is a problem with your child” noise. These “loose leds” were a problem for 3 days before we changed the stickers for the belted option. The monitor company said it shouldn’t make a difference but it did. The alarms ceased and we all breathed easier.

The 6 of us spent the weekend together – the men watching football and fishing from the dock, and me watching Nicholas. The men did get some good time in with Nicholas, too. My dad gave Nicholas his 1st fishing lesson in the form of a chat in the recliner about how to throw a line and reel in a fish. And Parker, who has been dubbed “Uncle Bubba” gave Nicholas some advice on the finer points in life: how to win the ladies over with southern charm. 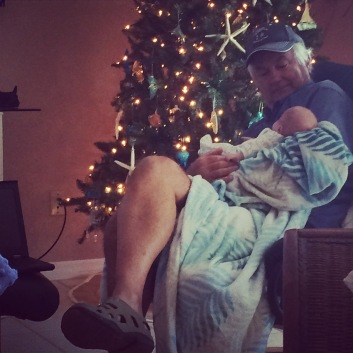 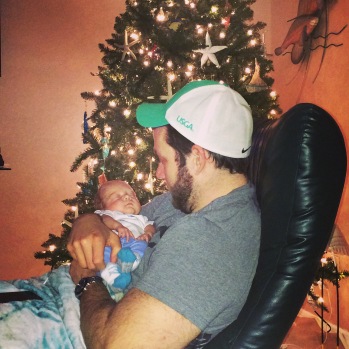 Ron & Lois, Andy’s parents, arrived Sunday to spend a few days with us before we left to drive home to NC. Like Parker, they had planned their trip before we knew Nicholas would be out of the hospital so it was great that they, too, got to visit with him outside of the NICU.The last time they were here, Nicholas was just days old and “so very small” as Lois kept repeating when he was born. I’m glad they didn’t have to go back into the NICU since it was such a scary and unsure time for all of us. Ron was eager to hold Nicholas and spent much of his time in FL holding Nicholas while he slept. Lois got some good snuggle time in with him, too! (Of course, Ron got some good time on the fishing boat and Lois some good time reading and practicing her sudoku by the pool, too!).