Today is World Prematurity Day. We (as in everyone who knows today is world prematurity day) are  supposed to wear purple & support the March of Dimes. However, I’d like to ask “we” (those that know & love Nicholas) celebrate it a bit differently.

Frankly, I don’t care what color you wear today. Andy left the house in (I think) blue. Me? I’m wearing gray. Nicholas? Well, he had on navy blue but had too much fun at the breakfast table this morning so he instead left our house wearing a bowtie & suspender adorned onesie (which was, by the way, blue).

You want to wear black? Great (most of my wardrobe would be right on board with that color). You want to wear that mustard yellow color that is oh.so.popular this season? Have at it & kudos to you if you can pull it off. You want to wear purple & tell everyone it’s because of a special preemie named Nicholas you know? Wear it with pride then, darling.

But, instead of focusing on what we’re wearing today…

Pray for NICU families. Pray for those who aren’t as lucky as our little clan is. They’re out there.

I know one personally right now who is living through a 90 day (& counting) NICU stint with a 3-year old at home. Her 3-month old in the NICU has undergone 2 major surgeries to reroute his intestines & correct hernias. He’s had 5 blood transfusions. He most likely will have developmental delays because of the trauma his little body has experienced. He has a GI tube & is still on a ventillator. Yet, if you were to see his face (trust me, I have, and if you could you’d fall in love) you’d see the fight in his eyes. You’d see a soul who was born at just over 2 pounds and who, despite his circumstances, has grown and now weighs a whopping 7 pounds. (I remind her that Nicholas was close to 5 months old before he weighed 7 pounds).

She has hope. Her husband has hope. Their 3-year old (who I gather is wiser than her years) has hope. But they’re tired. She is tired. She is numb. She wants to be hopeful but everytime she is, they take a step  back in progress. So, instead she keeps quiet. Prayerfully loud, yet quiet.
And, I get it. I’ve been there. I’ve been pulled at both ends – where you live in a world where your sick, small child needs you yet the world is all “hey, I’m still here & I’m still turning & bills need to be paid & phone calls need to be returned & the lawn hasn’t been mowed & laundry is piling up…..” and on & on. I get it.

Pray for the NICU patients who don’t have parents who can or choose to be by their child’s side. Trust me, they exist. I’ve seen incubators sit days, sometimes weeks without a visitor. And when those babies were visited it was for short stints with parents who were sidetracked by other thoughts or things. There are children who only feel human touch when a nurse or doctor touches them. Those children might not physically understand their environment or what loneliness is but their souls do. And my heart aches for them.

Pray for the NICU teams. If I won the lottery tomorrow (& if I do, I’m buying an island & moving there) there are a few nurses in SW Florida who would get their very own island by mine (I’m pretty certain they know who they are). These people are the reason we have our Nicholas. Without them, he wouldn’t be here. And he certainly wouldn’t be as healthy & strong as he is. When I wasn’t able to be by his bedside (mainly because I wasn’t allowed to move into the rocking chair that was by his incubator) they cared for Nicholas. They loved him (really, they did). They translated for me when medical lingo became too much and put others (sometimes doctors) in their place when they wanted to disrupt care plans or our situation. These people make families everyday and I am certainly thankful for it.

Pray for Nicholas. Pray that he continues to grow strong & healthy & that his personality continues to shine (his personality by the way is  all of his mama & dada rolled into one. Watch out world, you ain’t seen stubborness & persistence like this before). Pray that Andy & I continue to raise our son in a manner that would glorify GOD & would makethose that went before us oh.so.proud. to know that he is part of them.

Enjoy these photos. The 1st is Nicholas at. 6 weeks in the NICU & the 2nd was a photo snapped on his 1st birthday. What a difference a year makes. 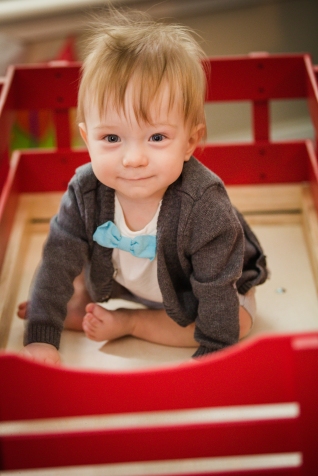 One thought on “on world prematurity day.”